The 2019 Indian general election witnessed huge online spending than ever. The national party’s marketing budget hold a huge share for online advertisements. With the increasing ads, and in accordance with the Election Commission of India, social platforms like Facebook & Google came up with strict rules and guidelines to publish election-related advertisements. The Elections are always a hot subject on Social Media too. Twitter recorded 396 million Tweets related to the Lok Sabha Elections from 11th March 2019, the day elections were announced, until result day, nearly 600% growth than 2014 elections. Campaigns, manifestos, and news around policies and key social concerns have been accounted for. Nearly 3.2 Million tweets were created on the counting day.

Election campaigns this year principally are prompting viewers to vote with millennials and the youth has been the prime target. With the poll season in full sway, brands continue to be socially responsible and building campaigns around the importance of voting.

When the National parties were busy with their own campaign the brands shook hand with the election commission of India in spreading the awareness of the voting right and necessity to vote. Many major brands came up with the wonderful campaign insisting people to vote compulsorily. All the campaigns generated a huge impact on the first time voters which resulted in the huge first time voters turnover. This also recreated the brand image in the minds of people. Here are a few interesting campaigns by top brands.

Flipkart is one of the most famous Indian e-commerce sites recently acquired by Walmart. Being so much loved by the people of India, they showed their love back by creating the awareness of voting by realising a small video and a poll which ignites the feel “Voting is my right”


They released a small one and a half minute video which showcases people belonging to different religions and regions of India coming collectively to cast their vote – one at a time. With the Tagline “we may be different but our vote makes us equal”. This video gained nearly 36 million views on Youtube and is most appreciated among the industry.

Their campaign didn’t end there. They released the below poll

This poll made the youth think of the importance of their vote. These two are simple yet created a huge impact on people’s mind.

It’s no more “Finger lickn good”. Yes! You read it right the international brand KFC’s campaign for the Indian Lok Sabha elections 2019 was a small video where their “Finger lickn good” changes to “Finger lnkin Good”. This is one of the most minimalistic election campaigns which showcases the importance of voting and getting the finger-tips inked on the election day.

Be Finger Inkin’ this election!

As being one of the most prominent TMT bars producers of Tamilnadu they never fail to do back to their customers in every possible way. This election is not in their exception list. They created a custom campaign for each district and telling every person to Go and Vote with the tagline “Go vote District name”. 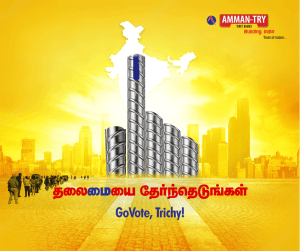 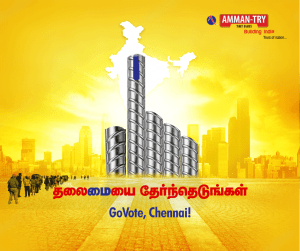 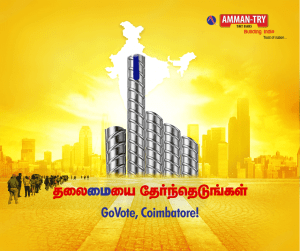 This campaign got a huge appreciation from the general audience and in turn, created a huge online brand image for them. By the end of the campaign, they were able to reach utmost every profile in Tamilnadu. During the election day of Tamil Nadu, they released another post with an interesting tagline, to view it click here. This post is one of our favourites as they merged their tagline with the importance of voting.

Viraly is one of the fast-growing dairy processing players in Tamil Nadu. They are known for their pure dairy products and their affordable price. Their Election campaign is an interesting one. 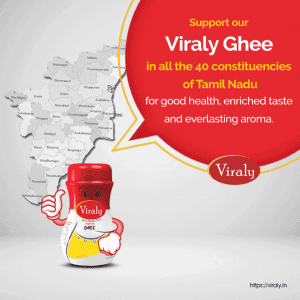 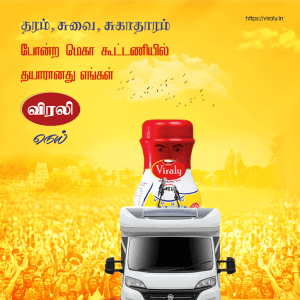 They came up with a unique idea of promoting their business at the same time creating awareness about the “Duty to vote”. All their posts are designed in such a way that their product is a candidate in the election and it is manifesting for itself. This idea gained the attention of everyone in the nook and corner of TN.

If dealing with people is art then Swiggy is the master of it. They made sure that their employees do their duty as the citizen of India properly and they came up with the initiative of giving 50 smile points for everyone Swiggy employee who votes. They did it with the campaign which gives everyone who comments the pic of the voted finger to their post. This witnessed comments from employees of various regions and everyone was rewarded. To know how they designed click here.

The Network 18 network is one of the top-performing news channels of India and known for their perfect updates on the happenings. How would they miss the Elections?
They came up with the simple post with the caption “Button Dabao, Desh Banao” meaning “Your vote is your voice”.  This was simple yet too good and was appreciated by many.

As always the brand Amul has come up with yet another cartoon where their girl with the butter in the hand and stating the words “I’m Makhan a difference” along with the caption “The people make their choice!”. The appreciation piled up for the brand for creating awareness as well as spreading their brand.

One of the most appreciable efforts is taken by the election commission of India, Tamil Nadu wing. From the time the election dates are announced they became very active both online and offline.

They concentrated more on Twitter than any other social media platforms. They began their campaign by posting posts and video’s which explains the need to vote and why it is the first duty of every Indian in both regional languages as well as in English. Once they made their strong presence, they started involving people with a competition which insisted everyone create a tagline with the word “மை” in it. This got a huge appreciation all around the world and as a result, TN witnessed 72% turnover rate on the election day. They did every post with the hashtag #MakeYourMarkTN.

Google never fails to participate in major happenings of India, as always they came up with the doodle that insists everyone cast their vote during the election days.

On your mark.
Get set.
Vote.

Today's #GoogleDoodle marks the beginning of the 17th general elections in the country, to be held in 7 phases from today. #IndiaElections2019

These are a few of the brands which performed their social responsibility digitally. Let us end the word with words from the expert.

Digital lends itself beautifully to any long- or short-format videos which most of the current election campaigns are made of. Facebook and YouTube continue to be the two most leveraged platforms because they offer the highest reach but this election we have seen brands leveraging over-the-top (OTT) platforms such as Hotstar to capture the attention of millennials as well.